Air Force veteran Ken Morrow never deployed, but his time in the service left him with injuries anyway. For years, he was subjected to loud explosions and he suffered a severe head injury on the job. He lives with a traumatic brain injury as well as hearing and mobility problems.

Today, Morrow relies almost exclusively on Toby, his black German shepherd, to cope with those lingering conditions, as well as long-standing anger issues. If Morrow starts to wobble or show signs of collapse, Toby is at his side instantly, protecting him until he can recover.

Morrow’s wife worries if he goes somewhere without Toby, afraid that without the dog to curb his temper, the errand will end with a call from the police department.

“He keeps me from going to the next extreme,” Morrow said. “Once you know you have something else that depends on you for everything, it puts everything in check.”

The VA started researching the effectiveness of service dogs for mental health conditions in 2011. The project has been suspended multiple times in the years since due to “dog quality and accountability in the service dog community” according to the VA. A spokesperson defended the research timeline in a statement to CPR, noting the “complexity and scope of this study are far beyond any others ever attempted.”

Until the VA is confident that using service dogs as mental health therapy has a “proven value,” the VA has said it is not ready to devote money to train these dogs.

However, some in Congress are tired of waiting for the VA to get that proof.

Florida Republican Rep. John Rutherford is lead sponsor on the latest iteration of the PAWS Act. The bipartisan legislation would create a $10 million grant fund through the VA to support organizations like Victory Service Dogs to train and match dogs with veterans in need.

“How bad can it go? We’re giving them a dog, for God’s sake,” Rutherford said.

The VA has not endorsed Rutherford’s bill and it didn’t go anywhere the first time it was introduced, in 2016, but that’s not stopping him.

“We don’t have any scientific data yet, but we have tons of anecdotal stories of servicemembers saying ‘look, but for that dog I would be dead today,’” Rutherford said.

As VA research continues, some science has started to trickle out that supports the idea of providing veterans with service dogs for mental health conditions.

A study published in 2018 by Purdue University found veterans suffering from PTSD who were paired with service dogs slept better and experienced less anger and anxiety than those without the animals.

In Colorado Springs, Victory Service Dogs has paired about 250 veterans with dogs since it was founded four years ago by CEO Steve Corey.

The training, done in tandem and tailored specifically to each individual veteran’s needs, often takes up to two years. It’s a process that costs thousands, but the veterans only pay a $50 service fee. Donors and grants cover the rest. Corey said additional assistance from the VA could massively expand his efforts. 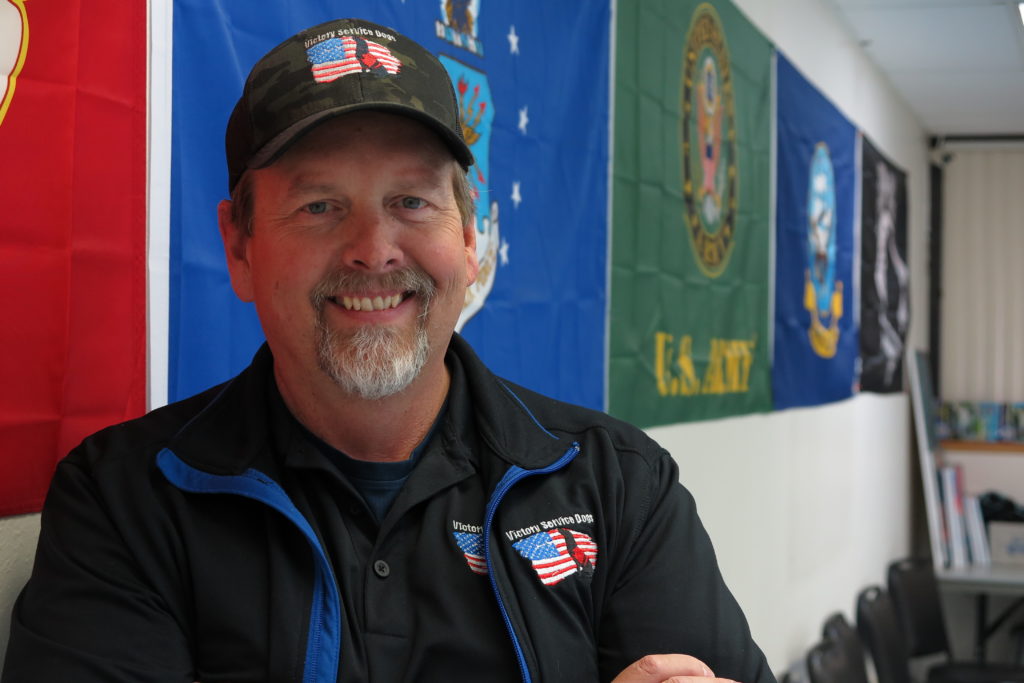 “That would be a game-changer for us,” Corey said.

The VA has been running a small pilot program to pair service dogs with veterans to aid in their mental health concerns. But The New York Times reported in the summer that, so far, only 19 veterans nationwide have received dogs in the year and a half the program has been operating.

This story was produced by the American Homefront Project, a public media collaboration that reports on American military life and veterans. Funding comes from the Corporation for Public Broadcasting.

Editor’s Note: This story has been corrected to correctly spell the names of Ken Morrow and Toby, and to clarify Morrow’s role at the organization.